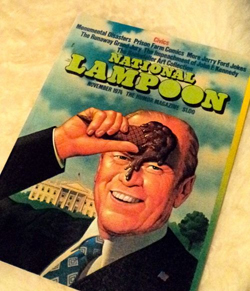 Declaring a War on Seriousness

I miss being irresponsible. Before I had a mortgage. Before I switched from having a job to managing a career. Before I knew what a 401K was. Before I worried whether Social Security would be there for me and whether I would have enough money to live on when I got squeezed out of the workforce for being too old. Before I cared about health insurance because who was going to get sick?

I remember getting my brand-new issue of National Lampoon and curling up in the tub to read it from front to back. Laughing until I snorted

I remember getting my brand-new issue of National Lampoon and curling up in the tub to read it from front to back. Laughing until I snorted, calling my husband in to hear excerpts he didn't want to hear because he was kind enough to let me have it first. My favorite was "Tips and Tales from Bernie X." Bernie X was a New York Jewish cabbie who told these fantastical stories about everything from hunting Nazis to hooking up with hot women and driving celebrities across the country.

Everything is so serious now. Like many people, I read a lot of my news on the Internet, and I'm the one who reads the comments at the end of the article. There are a lot of hateful people out there sharing their spiteful observations about seriously depressing news. And the stuff that isn't serious isn't necessarily funny. So much of today's humor is focused on the horrors of reality, like People of WalMart -- it's a titillating train wreck but not what I would call humor.

Finding humor on the Internet is not the same thing as blocking out an hour or two to read a magazine from front to back. Snippets of humor here and there. Not enough to transform your thinking and not enough to transform your day. Just a little pressure valve, but it's better than nothing. I recently discovered The Fluffington Post. I especially like the cat section.

fearlessaging2
The writing reminded me of another old favorite -- the Weekly World News. I wondered if the same people were behind both publications. The print version of WWN disappeared in 2007, and I didn't know until I Googled it that it still exists on the Internet. WWN was famous for Bat Boy. One of my favorites was a headline, "Baby born with button nose." They doctored a photo and put a real button on a baby's nose. Maybe you had to be there, but I remember reading it on a camping trip and laughing until I cried.

As I've aged, I've noticed less humor in my life. Or maybe as we get older, we don't find as many things funny as we once did? I don't think that's the case. I think we get caught up in the responsibilities of life and forget our inner child who just wants to crack up.

Humor and joy is the fountain of youth, and finding these treasures reminds me that I need to incorporate more silliness into my life -- books, magazines, movies, experiences.

So ... I'm declaring a war on seriousness. Humor and joy is the fountain of youth, and finding these treasures reminds me that I need to incorporate more silliness into my life -- books, magazines, movies, experiences.

Series Two
On Declaring a War on Seriousness
On work, cancer and life lessons

What scares me is this crazy idea I have  that God forgot I was supposed to die, and now I'm like, "Hey! God! I'm over here!"

Since I was first diagnosed in 1999, I thought it would be good to help educate women about ovarian cancer if I survived long enough to tell the story. But it seemed like all the good spokespeople died, so I wanted to wait until it was safe to go in the water. First I said, well, I won't talk about it until I've gone five years cancer-free. Then I hit the five-year mark and said, well, I'd better not say anything until I've gone 10 years. Then I hit the 10-year mark and said, so far, so good, why speak up at all?

Here I am in year 14, and it's time to give back.
I'll take my chances with God.

I've been thinking about what I will say in my speech, which will only be 20 minutes or so. There's one story I share occasionally to remind colleagues why it's important to find a way to like the people you work with. As we all know, some people are not easy to like, and managing relationships in the workplace can be the hardest part of the job.

We were living in Charleston, S.C. I had a great job, but there were no opportunities for me to advance out in the hinterlands. The company was headquartered in Columbia, about 100 miles inland, so I knew I would eventually have to move to get ahead. A fast-talking recovering lawyer I had been working with on a special project was appointed head of a new business area, and he told me my career would take off like a rocket if I came to Columbia and worked for him. He had deep roots in the town and in the company, and I fell for it.

In our house,we call that move "The Big Mistake." The job turned out to be a snoozer, and we bought a fixer-upper we hated in a neighborhood named after my boss's ancestors. He said this was where we needed to be. This start-up business area was being populated by people he hand-picked from all over the company. I was in a work group with three other women. Mary and Charlene were my age -- 40s -- they'd both been with the company a long time, and this was their first job outside of what we used to call the secretarial field. Sandee was fresh out of college.

The building was new, and the furnishings were arriving daily. We all had our own cubes with a desk and chair, but extra seating had yet to arrive. The work at first was rather undefined, and the three of them would sit on the floor in each other's cubes and chat. I decided right away I would have nothing to do with them. Even after the furniture came and we all started doing real work, I continued to tune them out. I did not need these three women to do my job.

I'd been there a few months, and it was time for my performance review. The boss said I was doing great work, but he noticed I didn't interact with the other three women in my work group. I was absolutely stunned! I explained how I found their behavior less than professional, and I focused on my work instead. He said fine, but finding a way to connect with your co-workers is part of the job, too.

I made a decision to win them over.

I remember being so utterly pissed. I'd worked hard in my career, and now this was going to drag me down? It hadn't occurred to me until then that they didn't like me any better than I liked them. I made a decision to win them over. I can't say I reached this decision as a result of searching my soul or anything profound like that. I just wasn't going to let anything get in the way of my career. You want me to be friends with them, damn it, I will be friends.

We started to talk. I made it my mission to find out who they were as people. I only did this because I thought I had to ... not because I truly cared. But somewhere in the process, I started to care.

I learned that they were real people with real fears, and this gig wasn't working out like they thought it would, either. At first I truly thought it was a waste of time to talk with them when we should be working, but I noticed a change. We started to build trust and actually discovered that we did need each other to do our best work. We learned to collaborate and ask for help when we needed it. It was more fun and less stressful to work there, and our productivity improved.

Things were humming along professionally, but I was experiencing bloating and pain in my abdomen.

Things were humming along professionally, but I was experiencing bloating and pain in my abdomen. I couldn't eat a lot in one sitting. For lunch I'd usually opt for a small can of tuna. I'd eat it right out of the can, and my new friends teased me about my cat food. The doctors thought I had adhesions from previous abdominal surgery, so I was scheduled for outpatient surgery on a Friday. Back at work Monday.

Except that isn't how it turned out. The doctor found cancer. He was a general surgeon, so he knew to leave it alone and refer me to a board-certified gynecological oncologist.

The doctor found cancer...The incision is what they call pelvis to sternum. It's big. Lots of staples.

I had to wait a few weeks to see the fancy doctor, and it was almost exactly one month later that I had my big surgery.The incision is what they call pelvis to sternum. It's big. Lots of staples. I was recovering in the hospital. My husband had been there, but at first I wasn't allowed other visitors.

They finally said it was OK to see people, and the first three visitors to walk through my door were Mary, Charlene and Sandee.They were smiling and overjoyed to see me alive. The three people I had dismissed because I didn't need them. It was a terrible time, and they were so kind and caring. At the hospital, Mary wanted to see the scar, and I quickly flipped off my covers to show her. Young Sandee said later that she almost fainted. We laughed for a long time about that.

The business unit was eventually dissolved, and we all went on to do other things, but we kept up our friendship as we moved about the company. I left South Carolina for a new job in Texas and lost touch with them. But they have never left my heart. Building a relationship with Mary, Charlene and Sandee changed me.

Series Two
On Declaring a War on Seriousness
On Work, cancer and life lessons

Writers at The Sage Companion appreciate your comments. In fact, we look forward to your response to our words and ideas. Please let us know what you think. Simply use the form below.