GOATWOMAN-SPRING
and then Summer ... and then 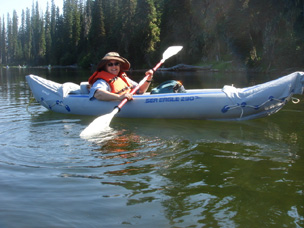 After having a little conversation with our Pygmy goats this morning, they helped me to decide to share a story about living on the farm and what it means to us besides new blossoms, frogs singing, gardening and birds returning from migration.

About 17 years ago I was living in my cabin on my 10 acre farm. Across from my driveway lived my mother in her little house. Mother enjoyed feeding the birds. So, she had me place a feeding station high on a tall post so that she could watch them from her window and she kept it supplied with plenty of birdseed.

One day a huge Gander came flying in during the morning and landed on the feeder, knocking it to the ground, and proceeded to eat the seeds.When he finished eating, he wandered down the field and flew off to the south,much like a very heavily loaded tanker,only to return for a dinner repeat.

Goatwoman-Spring and then Summer On the Goat Farm

So, Mother named him "Gray", as 'That Fat Gander" was no longer adequate.

To protect the bird feeder, Mother put out a doggy dish for Gray to have his own seeds and a water dish. He was quite happy about that. If she was late getting his breakfast or dinner, he would march up to her door and peck the outside of the house until she appeared.

And now, it was the only way I could get past Gray to Mother's house!   Gray had a big attitude to go along with his size.   He stood almost as tall as me.   Well, that's not tall, but one honk and hiss from him, and I'd want to run. So, I left Gray alone about his mooching the birdseed. I just hoped Mother could keep him supplied.

Gray often argued with the goats and would run flapping at them until he reached their fence. They were very curious about this big, honking, hissing beast, but were smart enough not to go near the fence when Gray was stomping about.

One time Gray accidentally landed inside the goat yard and ran out of enough runway to take off.

We didn't know if we should be more scared for him or the goats, but he finally figured out how to rev up his motor enough to cross the goat fence. He made sure that didn't happen again.

Then, one Spring day, Gray showed up for breakfast with a guest. She was a beautiful Canada Goose (we learned not to say Canadian Goose when we started watching birds). The Canada goose had landed for a stop at the neighbors where they have three large fish ponds. Well, now Gray must have told her quite a line and was now puffed up larger than life. He brought his girlfriend for breakfast and dinner and strutted around demanding more seeds and showing off his dining service.

Then, one Spring day, Gray showed up for breakfast with a guest.

Lucy would stand watch while Gray ate his seeds and drank his water and he would do that same for her, although she wasn't really sold on the seed thing and would sort of go through the motions to keep her big hunk happy. In fact, she often missed the landing field near the feeding area and ended up in our creek, which set Gray off into a snit who would then march down to squabble at her until she followed him back up to the feeding area.

We never saw any goslings from the pair, but they often flew over the house during the day, Gray barely clearing the house, and Lucy making two or three loops to his one. They would circle the farm, flying low enough overhead for us to see that Lucy had a space where the feathers separated on her left wing. So, even when she flew high, we could tell it was Lucy.

Gray and Lucy flew off during migration, we assume, as they were gone until the next Spring when they returned to the feeders again.

It was such a great joy to hear them calling in the sky and we'd run out to wave at them as they flew low overhead, and then landing for the season, Gray rushing to the feeders and Lucy patiently waiting to fly to the ponds.

Then one year, Gray didn't return, but Lucy returned to the ponds. She gave up the gourmet birdseed diet altogether. So we drove the valley looking for Gray, thinking he must have gotten tired of trying to keep up with his athletic girlfriend and went back to his farm, but we never found him.

So, for us, Spring is a time when gray days are gone and our Gray is a sweet memory and our Lucy clan keeps our eyes to the sky and our hearts filled with joy to greet the new season.